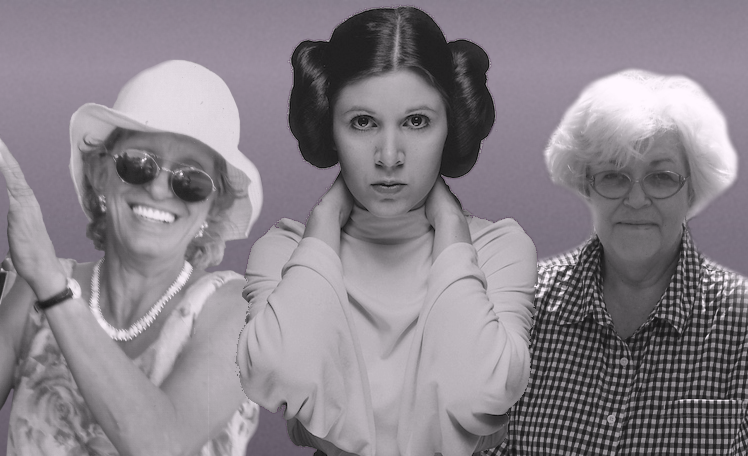 When I was growing up, I had two very different moms.

My biological mother (“Mother”) was an aggressive, no-nonsense chick with zero tolerance for anyone who got in her way and a fair amount of engine grease under her nails.

My stepmother (“Mom”) was an ambitious career-oriented go-getter who could develop skills faster than the drug store developed photos.

They both had their flaws, but you know what wasn’t included in a list of their flaws? Being a woman.

So when I cracked open Heir to the Empire and embarked on my first “big book” in elementary school, I didn’t think twice about Timothy Zahn’s depiction of a butt-kicking woman leading the reconstruction of an entire galaxy. This Leia character I’d seen in the Star Wars movies was no less formidable as the story continued.

When the cool diplomat showed the backbone of a once wartime general, I saw my Mom yanking the scruff of my neck and putting me in my place.

When Princess Leia Organa Solo fearlessly faced assassins, I saw my Mother defending me from a vicious dog.

When “Lady Vader” freed a planet full of resistant Noghri through patience and cunning, I saw my Mom leading a small town into drawing actual tourism.

When the sister of Skywalker learned the ways of the Force, I saw my Mother disassembling a transmission to discover how to repair it.

When Leia leaned on soul-deep camaraderie with Winter, I saw my Mom’s many visits with her lifelong childhood friend.

It’s been said before that when Disney bought the Star Wars franchise, they got more hero than princess in Leia.

Oh, some people think of her as objectified thanks to her iconic metal bikini, but let’s not forget that when she was armed only with the chains of that very objectification, she single-handedly strangled the very life out of one of the biggest crime lords in the galaxy.

Leia wasn’t the only hero in the saga, but she wasn’t a secondary, supporting role either. Her opening line in the 1977 classic had her simultaneously insulting two of the most powerful men in the galaxy. No one ever told this woman to grow a pair.

As a parent, she was protective. As a diplomat, she was uncanny. As a general, she was wise. As a wife, she was loyal but no doormat. And she failed, made mistakes, and stood in the background at times. But she didn’t shy away from difficulty, and she handled the limelight with poise and competence. She was epic.

But while Leia was all fiction, Carrie Fisher was as real as they come.

Today, this galaxy lost a star, but she wasn’t a mere cultural icon. She was a hero. A flawed one, much like her on-screen persona, but no less a hero for it.

After battling addiction, Carrie Fisher became an advocate for one of the most underrepresented segments of society: those with mental health challenges.

After her own battle, my Mother slowly collapsed into dementia and chemical dependence until eventually succumbing to (of all things) a Tylenol overdose.

When my Mother’s voice wavered, people like Carrie Fisher did not. And now, both are gone too soon.

My tears of loss are real tonight. But there are tears of joy, too. My Mom continues to fight on, and her smile warms my heart even more than she warmed my backside on more occasions than I could count (and less than I had coming). She faces health challenges that have caused concerns even tonight (thankfully my sister lives close by and is able to help, but prayers are very much appreciated), but she faces them with more courage than I could in her shoes.

It is this tenacity, this strength of spirit that informed my childhood perception of women long before any marketers steered me toward objectification, any religion aimed me at subjugation, or any southern subculture taught me that feminism is a bad word.

I appreciate Snow White, Marilyn Monroe, and Barbie dolls. They have their place, and they contribute something valuable to femininity. Every night I pray over my daughter Jade, I include (among other things) that she would know that she is loved and beautiful. I’m beyond okay with that. Leia was a princess, after all.

However, Jade’s walls are painted with bigger-than-life Powerpuff Girls. Her Christmas presents this year included a Zelda plush, a Wonder Woman doll, two dragons, and — of course — Princess Leia.

With such depictions of feminine strength saturating her childhood imagination, with more and more role models like Princess Leia in movies and literature, and with our unrelenting love and support at home, what a woman she might become!

She might just grow to have the fire seen in my Mother, the competence wielded by my Mom, and the love for the underprivileged as championed by Carrie Fisher.

Not a second-class citizen, defined by her future husband and shaped by cultural expectations. A hero in her own story. A hero in God’s story. A beacon of love, strength, passion, and grace. In short, a woman.