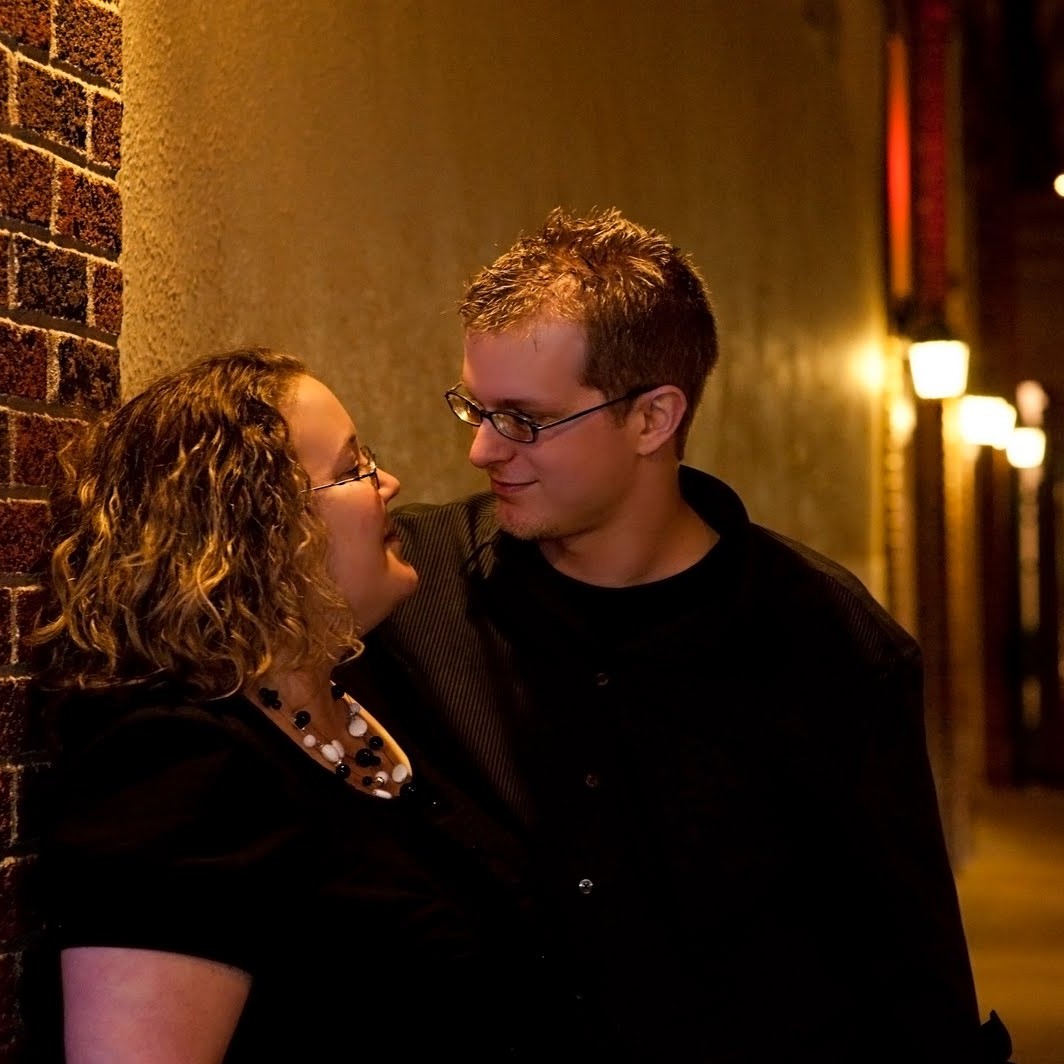 It took a little peer pressure, but Sarah agreed to have some pictures taken of us last night. Dana Heckler guided us through downtown Fort Worth in a night-time shoot. It was to be the first time Sarah and I had someone take a picture of us since we had a set of cheesy western-y photos (in full sepia, mind you) in the tourist haven Gatlinburg, Tennessee on our honeymoon. Almost 5 years ago.

It was about time.

We had a blast, too. Dana had some good vision for what she wanted us to do and the creativity just kinda flowed. Not only did we have a lot of fun just hanging out with the Hecklers (though Dana’s poor husband Brandon had to carry our Razzoo’s leftovers around all night), but we saw some interesting stuff.

We had music ranging from the acoustic worship group rocking out to some old-school praise and worship hits (Open the Eyes of my Heart, anyone?) to the Space Rockers cover band seamlessly transitioning from “Billy Jean” to “It’s Getting Hot in Here” to “Ice Ice Baby” and even a little dash of “Baby Got Back” (all while wearing what appeared to be Power Ranger costumes no less).

One moment that stuck out, though, was hearing a young man awkwardly pleading the message of Christ into a microphone and what sounded like a 1992 boombox (though I’m sure it was more than that). Not to deny the value of anyone’s ministry (and the Lord is certainly not limited by my perceptions of effectiveness), but I have a hard time seeing the long-term value in the clichéd street preaching.

Again, I’ll temper this with saying that God can use anything, and it’s up to Him to determine someone’s calling. Personally, though, I believe that building relationships within your circle of influence has a much greater return on investment than shouting at passerbys. To this guy’s credit, he was speaking of grace and forgiveness rather than hellfire and condemnation, but I just wonder if his effectiveness might improve were he to spend as much time engaging with his next-door neighbor as he does broadcasting to strangers. Then, as his influence grows and the presence of God in his life causes them to open up, he can disciple them rather than just saying a prayer with them and sending them on their way.

</rant> At any rate, we’ll see how these pictures turn out soon. I’m excited!

I’m so blessed to be a part of a team that values vision and unity.

Getting together periodically to discuss direction and strategy is critical in any organization. However, all too many focus so much on this practical element that they never address anything beyond the practical. Vision becomes a poster on a wall or a memo in our deleted items.

In ministry, it’s not so simple. A spouse of someone in ministry is also in ministry. There is an increased demand on the family that can be draining if it’s just work. The key is making sure everyone is on the same page. If people are bought in spiritually, relationally, and emotionally, the work and strategy come naturally out of a desire to fulfill the vision rather than an obligation to get a paycheck.

That’s one of the reasons I’m thankful that we have Family Staff Meetings at Milestone. Bring in the spouses. Get everyone on the same page. Cast vision. Give testimony. Encourage, exhort, engage.